The Football Journey of Vladimir Emilien 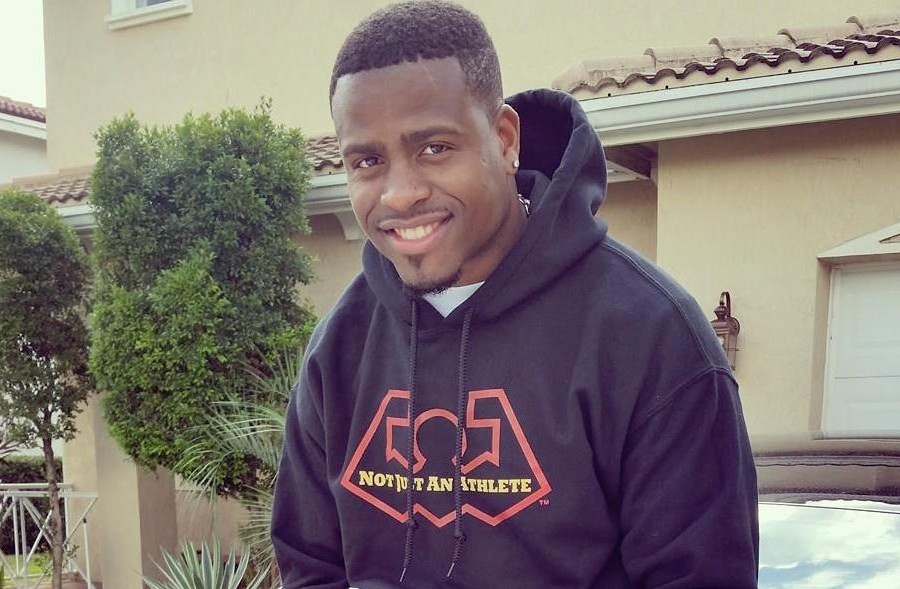 — Where did you get your name? It’s not very common in the US…

— Haha! Yeah, my name is not very US… It came from Caribbean. I’m from Caribbean, a lot of my family is there. People there like this name because of what this name actually means. In Caribbean it means “strong king, ruler of peace”. So when I was born — and I was born a big baby — 10 pounds, pretty big baby — so my Mom was like “we need a powerful name for this guy”. She came up with the name Vladimir which is very common in the Caribbean.

— How did you start playing football? At what age?

— I started playing football possibly at the age of seven. I started playing tackle football at the age of ten. In my neighbourhood a lot of kids were playing either basketball or football or soccer. So I was involved in almost all sports. We all were very athletic. A one of my best friends at that time told me once about Little League Football. It was very attractive for us. One day I went out and tried to play there and I did really well. That the story how I started.

— And when did you start playing safety?

— In Little League as well. But when I got to high school at ninth grade I played running back. But my couch thought I’ll be better playing safety. So I started playing safety permanently on my sophomore year at high school.

— Can you tell more about playing in high school? You ended up very high after it.

— I played in Plantation High School in Plantation, South Florida. As far as I started playing my position on my sophomore year I became pretty much a captain on my team. I was doing really-really well. On my junior year I was currently ranked #1 safety in my state and #10 safety in the country. But during my senior year I torn my ACL and I dropped from #1 to #3 safety in the state and from #10 to #14 safety in the country. So I was doing really well. I was recruited by almost all major universities in the country: Michigan, Ohio State, Stanford, USC, Florida. I was very fortunate to get all these scholarships.

— Finally, you got on Michigan…

— Yes, I went to Michigan, I graduated from my high school early to prove that I can play on a high level. I went there for two and a half years and than transferred to Toledo. 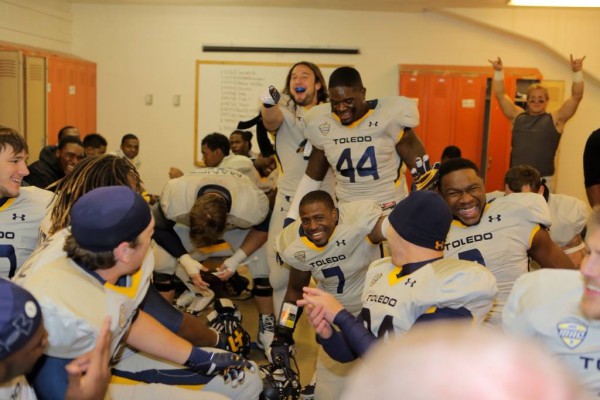 — In Michigan I played a couple of games as a safety but I didn’t see eye to eye with my coaches which is not very important, but… When I transferred to Toledo I started to play both safety and linebacker because I was a bit bigger, steadier. In Toledo I understood defence better, I learned to read offences and stuff like that. Than there were coaches changes. I really had good direction there but when new coaches came they wanted their players to play. The last two years I started only 12 games out of 24. I ended getting my MBA there and than I tried for NFL.

— But you didn’t get there.

— I went to few training camps but ended up with no signing. That was on my first year and after that I stopped. I tried to pursue my own business.

— And you started “Not just an athlete”?

— I’m glad you asked about it! That’s my brand.

— Can you tell about the main idea?

— It creates a platform for athletes such as myself to display a talent outside their giving sport. Because in the world today we see athletes only utilising brute force, not very smart, not very intelligent, just powerful big human beings. I feel like a lot of athletes have a lot of talents as being singers, as being in tune with the community services, as writers. What I’m doing is trying to empower others to understand that after they can’t play anymore, they can still contribute in society and make the world a better place.

— Is it non-profit or is it a king of venture for you?

— It’s kinda like both. I started selling shirts and stuff but I’d like to create a non-profit that gives a chance to travel more, like for example going to Moscow, going to China, going to Japan and exploring what this world has to offer. I’m trying to grow in there in the next two or three years and create opportunities for these athletes that they’ve never seen before.

— Are you doing this alone?

— I’m starting to partner up with the fellowship, the foundation that I’m on right now. They are called Gridiron Leaders Foundation. And I’m expanding on the opportunities to bring some other’s kids to other countries and continents so they can explore new football knowledge and gain career opportunities.

— What’s your main achievement during your work in “Not Just an Athlete”?

— I think it is writing my book which is called “Life as my teacher”. But also another one is exploring the new culture. Expanding football here in China. 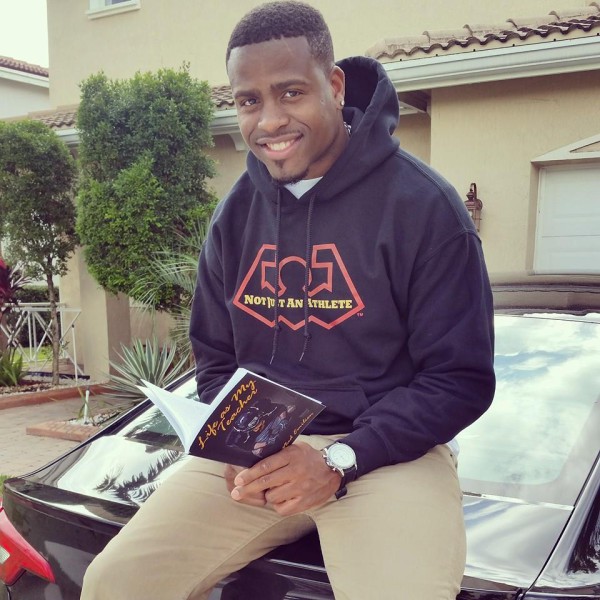 — How did you ever get in China?

— Okay, there was that foundation, Gridiron Leaders Foundation. They have asked me to come to China. This foundation is actually is building a league in China. They wanted athletes who played in the Division I — the highest college level — to come to China and teach some of those players. I’ve been placed in Beijing, and there are two more people who came here through this foundation — the one is in Chengdu and another is in Wuhan. We all teach our teams and getting ready to play the games. In this particular league we have twelve teams. But all over China there are over thirty teams which are trying to be part of this league. And we’re trying to grow all over China, we’re trying to expand football to other places, we’re continuously growing.

— So your main activity there is coaching, right?

— Correct. That’s one of my main activities. I coach my team which is called Beijing Iron Brothers. It started with only six players. And now we have fifty players. And we’re about to play our first game in a few weeks.

— Besides coaching what are you doing there? I guess you take part in some sort of promo events, I saw a photo of you with Lombardy Trophy.

— Yeah, I work closely with NFL. NFL is trying to grow it’s market through China. I’m trying to help NFL to attract more fans who will watch the games and who will understand the game. That’s one thing I do. I also work with one marketing media company here that’s focusing on sports, it’s called Shankai Sports. They have office in Switzerland as well, obviously, they are doing really big things over there. That’s where you have seen me with Lombardy Trophy — I was representing the media company I work for. And I also know some people from NFL who’re working here.

— Why do you think NFL has so much interest in China?

— I think because China has one and a half billion people. It’s a big market for NFL. It’s the way they can grow their fanbase. They have a lot of money here and a lot of potential fans — people who are interested in american culture. 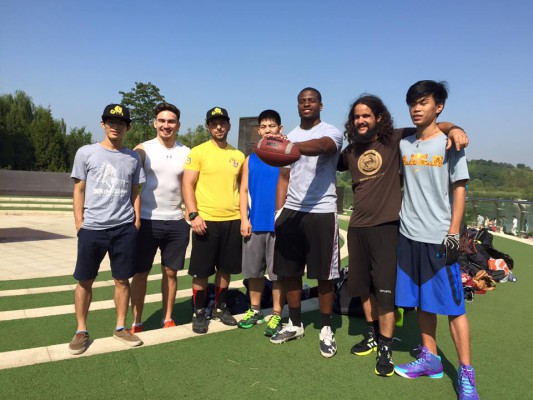 — Do you think there will be an NFL game in China soon?

— That’s really fast. Can you tell more about your team? What’s the current level of your guys?

— Well, from the time we started till now they have gained tremendous athleticism, they worked their butts off, they really love to learn. The level right now is quite high but I would not put them against collegiate football team. They have a good level of a high school team in America. Certain players have very good knowledge of football because they play a lot of flag football what is really great because the athleticism of those players. You see that they know how to catch, how to run routes, how to hold the ball, how to throw. So they are really great but they still have more to gain in the next couple of years. They soon will be implemented with the little kids we are playing with right now so the talent will grow every year.

— Do they have local coaches? I guess one day you will leave them and they will have to go by their own.

— One of the reasons why I’m here is to teach them how to run a team. I give them a little management practice, so they will know what to look for in offences, what to look for in defences, a type of timing they need to have to be efficient. I’m teaching them some drills so when I leave they still can have practices and get better every weekend. So I’m implementing a system for them to become a better organisation in future.

— Is it easy equip the team in China? Is it difficult to find a helmets and shoulder pads?

— I was fortunate enough to get a sponsor to equip my players with all the necessary things. But there are no football fields here, there are all soccer fields. It all have to be lined to become a football field. But I can only imagine how difficult it was for all those teams in the past to find the equipment and continuously upgrade apparel. But I think in one year or two it will be very easy because all football organisations understand that Chinese market is growing, they are trying to get bigger. I don’t think it will be hard for them to gain equipment in future.

— Do you know anything about the national team in China?

— I only know that they are working on it and they are going to build it in a year or two. 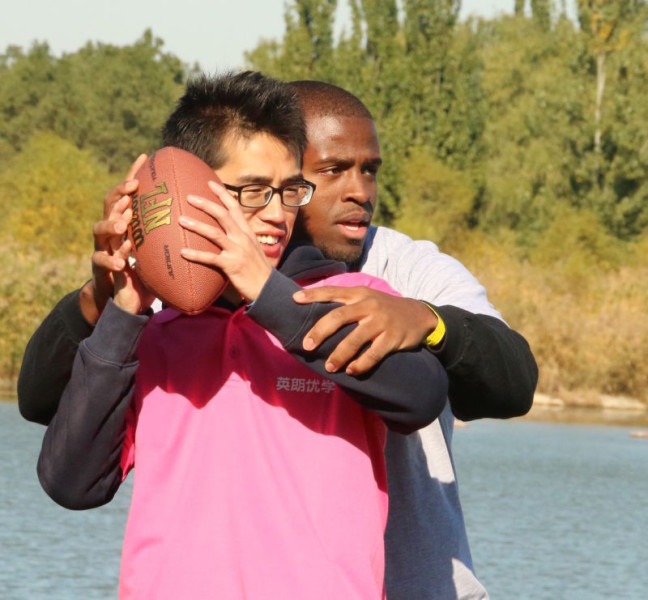 — What have you learned from your journey?

— This journey opened my eyes. This is complete different culture from american culture. And it showed me that there are much more ways than just american way. It makes me travel more, it makes me experience more countries, experience more people around the world. Speaking about my team it was really great to see the progression of Iron Brothers coming together and being passionate about the football. Because if you ask a typical american about Chinese playing football, the y will laugh. Earlier I would never imagine Chinese person playing football, very brutal sport. So yes, it was very-very eye-opening seeing China growing in understanding and loving the game of football in the way the americans do and people around the world do.

— Have you heard something about football in Russia?

— Just recently I’ve got knowledge about all the football outside the US. I’ve got different teams popping up on my Facebook since I followed the guy who runs American Football International. He showed me teams in Russia, in Poland, in Japan, in Middle East. I’m just started to understand that there are teams out there. Honestly, I’m not very familiar with the players yet but I’m starting to learn more about it. But it is very surprising for me that the american football culture is starting to grow all over the the world. That’s my inside on international football.

First & Goal is grateful to George Kochnev for assistance in organizing this interview.