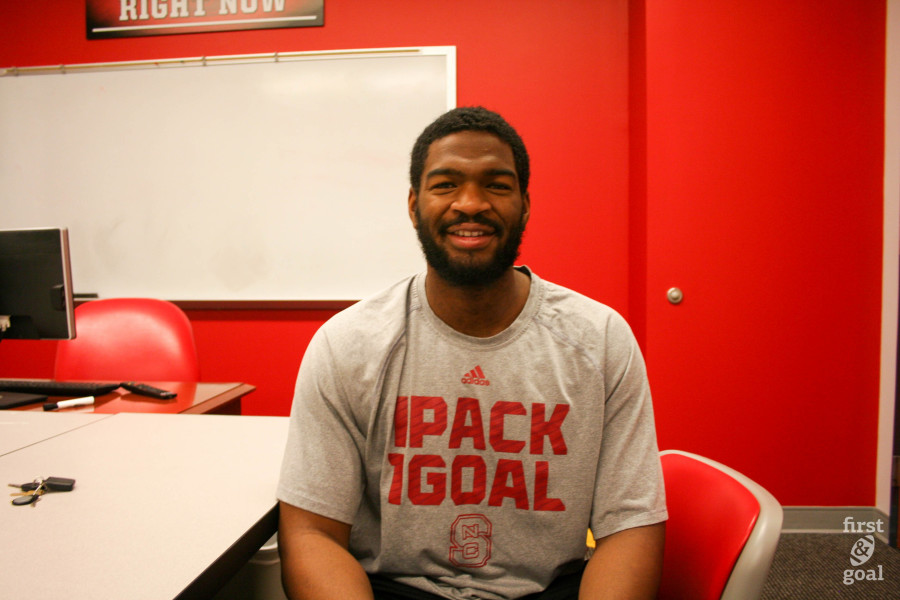 — Why have you decided to start a sporting career?

— My elder brothers always played football, it was always in my family. At the age of five I started to play tackle football in my hometown. When I moved to another town, I switched to flag-football. That’s how it all started — at the age of five.

— When did you start playing quarterback?

— You couldn’t choose between football and basketball. What do you like most about these sports?

— Well, in basketball you’re always out there: you’re on offence, you’re on defence. It is more controllable, it has faster pace and it has air conditioning (laughing) I mean, it is cool that you can do all the things on a basketball court, and you can get better in all of those things. In football you also can get better in all of things but you can’t control all the things. This is the biggest challenge: being able to do your job and making sure that you’re helping another people to do their job. You have to be more precise, more perfect. In basketball if you miss a shot you know that you’ve only missed a shot. In football if you do something wrong that means that you’ve given touchdown to a defence. This is more interesting, more challengeable. That’s why I chose football.

— And you changed university. You came from Florida to North Carolina State. Why? What was the main reason?

— Coach Doeren, who was in Wisconsin before, moved to NC State. My high school coach — we still have very good relationship — was a good friend of him. It turned out to be a perfect fit for me. When I came over I just realised that this is the place I needed to be.

— Weren’t you afraid of sitting the one season without practice?

— I had a practice but I couldn’t practice with the offence. It was great learning experience. I was doing the scouting for defence. And I learned a lot from that. Learned from other players. When you see a lot of players coming up, it helped me a lot. 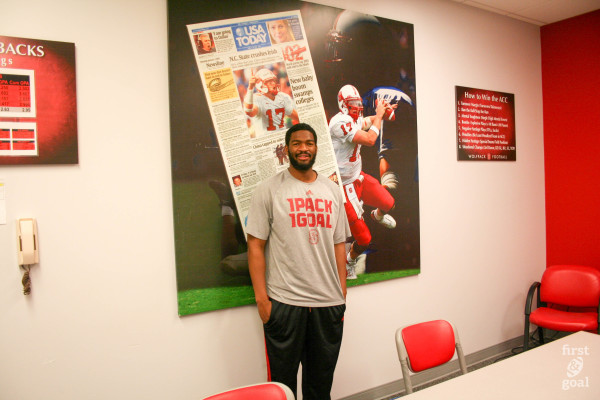 — What’s the main difference between these two teams?

— There is not so much difference. The dudes here are bigger but that’s because the recruit such people. This is football and everything is a same. If you get comfortable, it seems like that’s the right place, that’s how it should be. That’s how I feel here.

— And are there any differences in the game in two divisions? Is it another level or maybe just another style of the game?

— In ACC the stadiums are larger. The level of intensity of a stadium is much more different, the crowd get louder and louder, but the rest of the things… You’re against them, they are against you, you’re on the offence, they are on the defence. It is pretty much the same.

— Can you tell about NC State Wolfpack organisation? What is it famous for?

— It is a great organisation. It has family atmosphere that goes out. It is a team that always been successful. People call us QBU, because we always have a couple of quarterbacks in the league. That helped me. And I always liked North Carolina for some reason, even I’m from Florida. It is great environment, great people.

— Who do you think is the best NC State’s alumni?

— Obviously, they have got Mike Glennon, Russell Wilson, Philip Rivers. Of course they a had a lot of great players but I named those who are quarterbacks. We have Mario Williams, who was the #1 pick, we have couple of good players who’ve gone last year, two offensive linemen, I was a big friend of them. We always had some defensive linemen who were very good.

— Do you have any rituals, traditions? Before the game, after the game, in locker room, on a stadium?

— Before the game I just go for a walk with our director of operations. I take time to chill and relax. We talk about everything but the game. And I pretty much wear the same clothes before the game so I make sure that I have the same every game.

— Do you have any special celebrations?

— Not really, but me and my roommate have a special handshake before the game, but we forget to do it sometimes. And just before the kickoff when we take the field I just step before the whole offence and start from there. 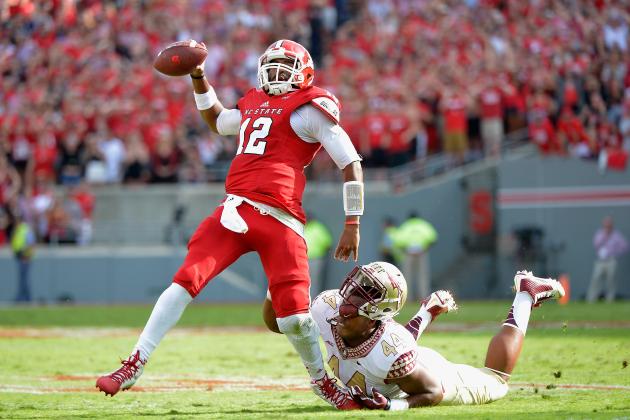 — Anything to do as a freshman? Like initiation. Do you have it?

— No, we don’t. Sometimes we make the rookie quarterback just carry the ballbag, something like that.

— Is there anything special in the relationship between players and fans?

— During the game I can’t talk to anybody outside. But before the game we have a team walk by coming to the stadium so we see all the fans, our families, we might just say ‘hi’ to them. But I don’t talk much, I concentrate on the game. And of course we have some fans who want to take picture or sign autograph, something like that.

— What was the most memorable moment of your career?

— I would say, here… The Georgia Southern game. The first game of last year’s season. My first game here. We were coming of 3-9 season. And the way we won that game showed that we flushed that from our door. That was the greatest moment with my team last year.

— What’s your team’s goal for the season?

— Everybody says they want to win the Championship game. But the main purpose of that is knowing that you’ve done the business on and of the field, just giving your best everyday. And not for just yourself but for everybody around you. And that’s pretty much our main objective, our main goal. Just take care of that. And everything will go on proper place.

— And what about your personal goals? Are you going for Heismann Trophy, first round, Super Bowl?

— All of that. I’ll just make sure I’ve done all for that.

— Do you have intention to go to the draft next year?

— Yeah, that’s my main goal. I’m on my senior year, so it is pretty much all or nothing.

— How much education is important for you?

— Very important, I’m getting my degree in December. That’s also my main goal, that’s what my Mom wants. She will kill me if I don’t get degree.

— What do you think of coming from students to professionals? It is tougher defence, harder hits. I know that you play like double threat quarterback, you scramble a lot.

— It’s all come from the conversations I had with other people, of course, It’s a big difference: the level of play, the intensity, things like that. It changed from high school to college, from college to professional it will also be a change. But at the end of the day, it is all football. The game hasn’t changed. The players around, they dressed up differently but they run the same plays. When you get to the next level you have to be more perfect, more precise, much smarter. That’s the biggest difference I feel in the NFL. 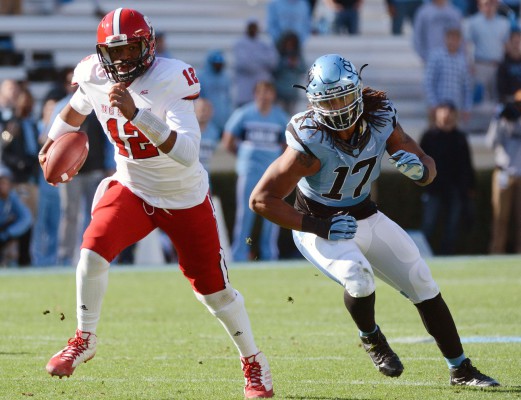 — Can something be done to reduce the possibility of injuries in football?

— OK, what is your favourite team in NFL?

— I don’t have favourite team. I just like quarterbacks. I watch down them, I see what they do. No matter what the score. Whatever they do I cheer for them. That’s how my NFL game look like.

— How do you like this year’s rookie quarterback class?

— They are where they are. There are some good players. I really think, those quarterbacks, you don’t know how it turns out, but they already had college careers, they played well. They’ve been given the opportunity that they deserve.

— Personally, I’m more for the Winston. Just because I saw him playing.

— It is hard to tell at this point of time. But I’m for Payton, I hope he’ll get one more ring. Ant the Patriots might get there too.

— Have you heard anything about american football in Russia?

— I thought your football is soccer.

— Did you know that Tim Tebow could play a couple of games for Russian team in 2013? But he declined…

— What will you say for football fans and players in Russia?

— I just want to say good luck for them. It is a fan sport to play. I hope playing it in Russia will help build it over here. I’m sure that it fun to start with a football player in Russia and get it over to the United States. That’s just the fact that it is going on over there is kinda neat. Because you see all the big basketball players from your country and now football is going on. That’s kinda cool!

First & Goal is grateful to Annabelle Myers, Assistant AD/Athletics Communications
(football) of NC State Wolfpack organisation for her assistance in preparation of this interview.