What is up for one of the youngest football programs in America? First & Goal is visiting Florida Atlantic

In a month, the impressions have calmed down. Let’s share!

No state in the U.S is denser in football than Florida. Three professional teams in the NFL, one in XFL (in the first version of the tournament, by the way, there was also one), even in a non-existent Alliance played guys from Orlando. You can’t count the student programs — there are as many as seven of them in the top division alone.

About Miami, Florida State, Florida, Central Florida is known rather much, history and traditions they are both rich and glad. And it is doubly surprising that in such a competitive environment full of football already in the XXI century — that is, quite recently — another player appears. 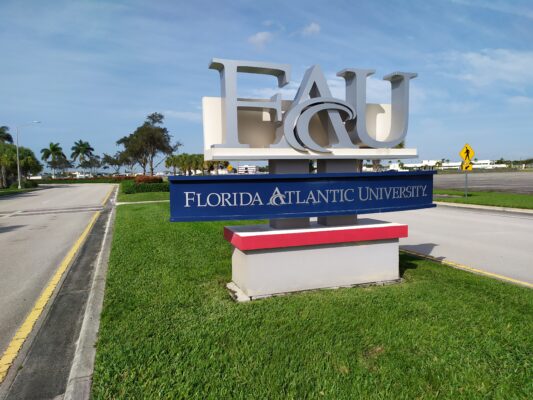 To get to know it, you have to drive 65 km north of Miami and get off at Boca Raton Station. The town of the same name isn’t just famous as a resort. In 1964, the first state university in Southeast Florida, Florida Atlantic, was founded here. For a long time it was a story mainly about education, but in the U.S., as we know, at the stage of the formation of personality must be somewhere near the sport.

So in 2001, the Owls college football team was formed. The campus is located next to a nature reserve, the home of night predators, and now their image is painted about everywhere — even at bus stops. 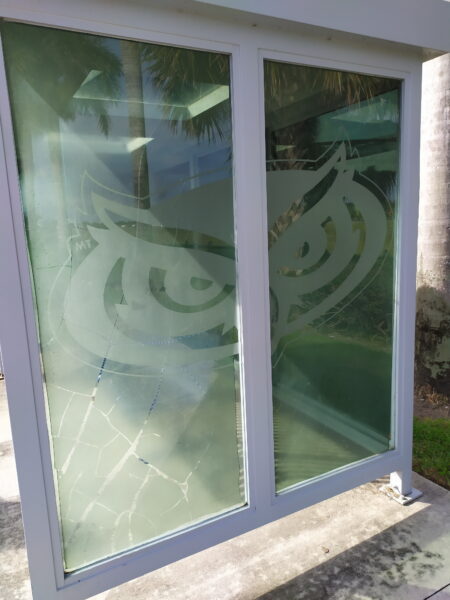 On the overpasses of Boca Raton, in their turn, the more peaceful by nature, but less sympathetic amphibians show themselves in a better form. The only ones who think they can sunbathe in Florida in February… Except for the tourists, of course. 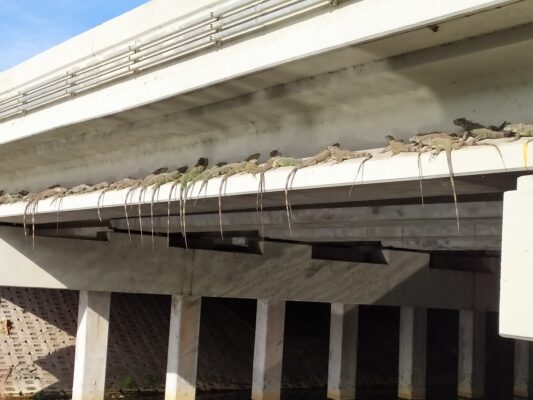 Justin Johnson from the PR department picks the elevator takes us to the fourth, top floor of the stadium office tower. Johnson promises a sightseeing tour, but with an interview with one of the players everything is complicated now. Warren Sapp`s son is «only a freshman yet», and he`s not on campus, and all the stars (about one of them later) went to prepare for the draft.

«The view is even better from here. Right on the ocean,» Justin says and opens the door to the roof exit. We go up and we look around for a while. 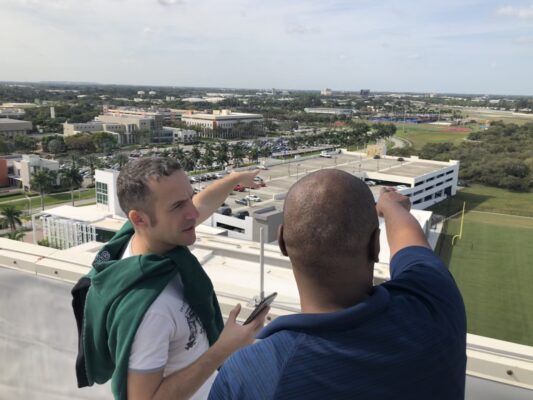 The Florida Atlantic Campus occupies an incredible number of hectares. There are a basketball and volleyball arena, which just got a huge scoreboard, and a track for running, softball and baseball (which are two different entities) stadiums and tennis courts. By the way, one of the FAU students — Natalia Boltinskaya — has high expectations in tennis, besides academic success. Are we waiting for a new Maria Sharapova?

Justin notes that the university’s baseball and softball programs have historically been the strongest. And thanks to the world’s best climate (a wording often heard from Russians), Owls have fairly quickly become competitive also in beach volleyball and tennis. Johnson recalls how the famous Serena Williams and young Cori Gauff came here to train before the Australian Open about a month ago. One day Mike Tyson came to visit them, and guys from the basketball team took a bunch of pictures together with the legend.

«It’s a private airport over there,» says our guide. «When Willie Taggart became the team’s new head coach, part of my job was to bring him back from campus to the flight.»

Currently, about eight thousand students are living on the FAU campus. Quite a motley crowd, and besides, changes are happening here and now. Previously, the university had quite a few so-called «non-traditional students» (there is no single definition of this concept in the U.S., in general, such a student must meet one of the following criteria: he entered college not immediately after school, has a job along with study, has dependents, has no secondary education certificate). Today, this is a more classic version of college, even if it is inferior to its titled neighbours like Miami and Florida. Staying in Boca Raton is decided mainly by those who do not want to spend 4-5 hours on the road to major cities.

While we’re going downstairs, we’d like to point out that the coverage on the Owl training field looks better than on the stadium. The fact is that no one has used it yet, and they will start to prepare the pitch on the arena itself closer to the season. 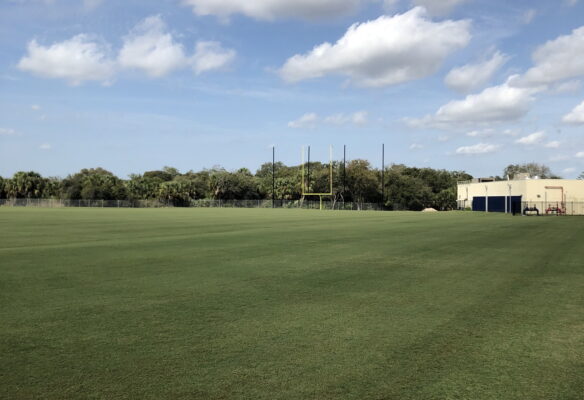 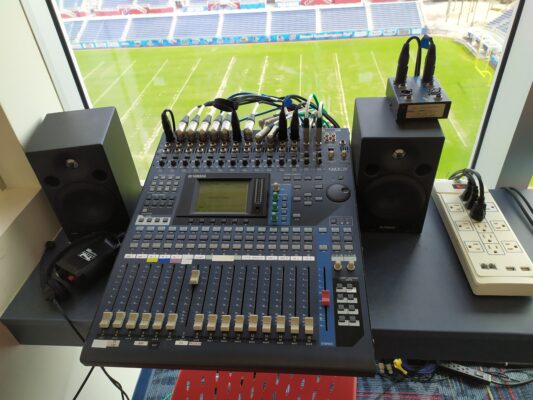 We ask Justin whether Harrison Bryant, tight end, who was included in the All-American team of the year and called to Senior Bowl, will return to the FAU to demonstrate his skills to the scouts. Johnson answers fluidly, saying that the player has not yet made a decision, and in open training (pro-day) there are both pros and cons. But forecasts Bryant to be picked in the second or third rounds of the draft. Bold prediction, given that the highest peak in the history of Florida Atlantic is the 65th — in 2015 at the beginning of the third round cornerback D’Joun Smith went to Colts. In general, the program recently boasts more runners over receivers — Alfred Morris, Devin Singletary (who with his 74th peak almost reached Smith).

With poorly concealed pride, Justin tells us that this year’s Super Bowl will definitely win an Owl graduate. The essence of the fact is that linebacker Aziz Al-Shair plays in 49ers’ special teams, and Chiefs has a cornerback Keith Reaser, who was injured before the season. As we now know, the championship ring will be added to that injury later.

Among all sorts of rooms and offices, there is no museum. Justin specifies that basketball players have such a museum, there will definitely be a Hall of Fame in the plans, but so far the management is focused on making all the conditions for the current generation. Just compare where the journalists were gathered before and where the press conferences will be held now. 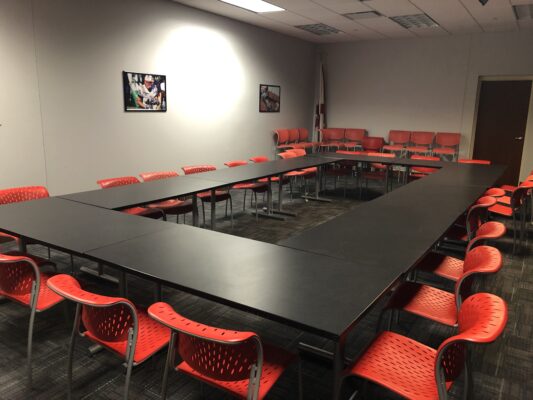 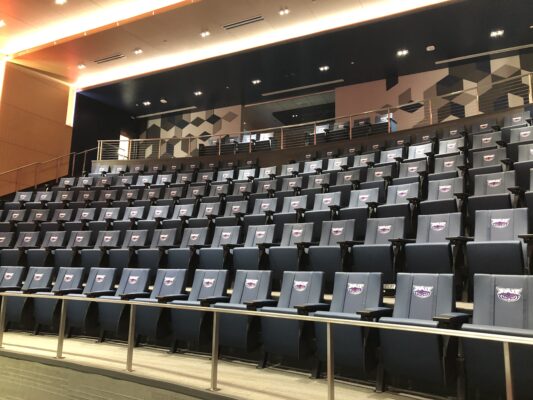 All in order, though. Right now we stay at the stadium and go out to the field. There are 29,000 empty seats around. You can get to the cheapest ones at the top of the stadium for $ 15, the most expensive ones will cost $75. FAU students have free passes to matches, and their relatives and friends are given special passes for individual games. According to Justin’s estimates, 17,000 spectators visit matches of Owls on average. Curiously, this is more than managed to gather for the main match of the year — the rivalry with Florida International, aka Shula Bowl.

Before that Bowl, the management decided to remove part of the seats on the north podium and organize luxury areas, the so-called Cabana seating. As a result, there was no loss either financially or sportively (the hosts won another victory over their principal rival).

We go to the next, much more modern looking hub. On the way, Justin says that just last week Willie Taggart finished forming his headquarters by inviting two new specialists. And the first official event at this very hub — the Schmidt Center — was the coach’s meeting with the team.

The center started to be built just a couple of years ago and finished before Christmas. Finishing works are still boiling on the second floor somewhere, but the building is already in operation and gradually all the facilities are being dragged from the stadium to this very place.

«There was always traffic jamming in the stadium halls,» Justin recalls. «The teams had to wait for each other to free up a gym for example. Now it should become easier.” 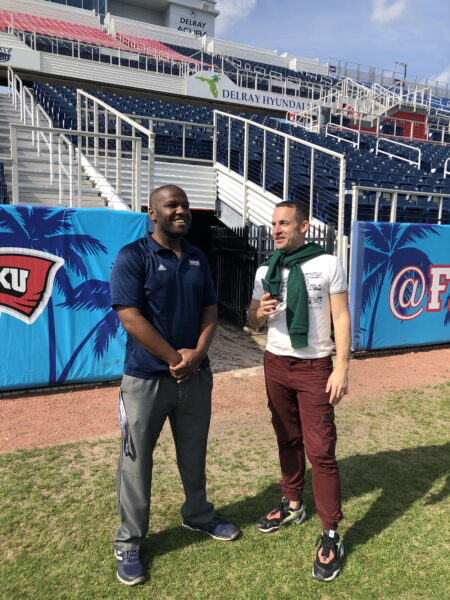 Inside the Schmidt Center, you can not only work out but also learn. Behind the room glasses, there are laboratories, computer rooms, a library. Johnson says that in mid-December the so-called early signing day took place at the university, and next Wednesday is scheduled for the big signing day. Just right at the Schmidt Center.

A new building has been built, as well as a new training field, and much more has been done thanks to donations. The stand with the most generous benefactors — mostly successful FAU graduates — is in a prominent place. The companies of three of them, for example, have donated more than $5 million to the college. Each of them. And that’s for sports only. 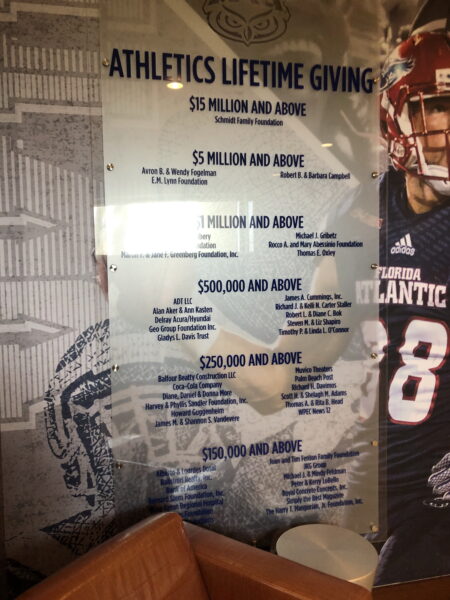 «We’re young, we haven’t established a fan base yet,» Justin explains. «There are no people who could say, ‘I’ve been rooting for Owls since I was a kid. It’s going to start with the fourth or fifth generation, our time will come.»

We say goodbye. With gratitude to Johnson and a strong sense that at this rate Florida Atlantic will live the present, not the future, much earlier than it seems. 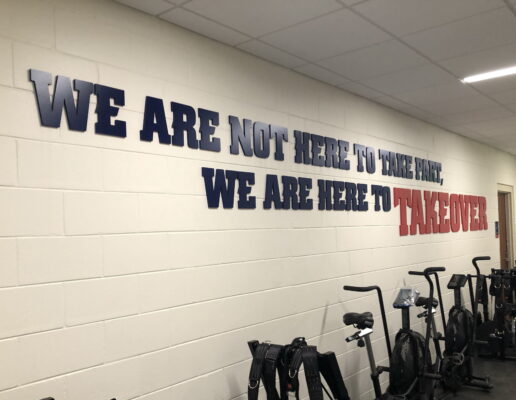